Many of you will have received our end of year letter in the mail this week. If not, here is what you missed! Thank you for donating generously to CAGJ during this giving season, to help us continue to build the global food sovereignty movement! 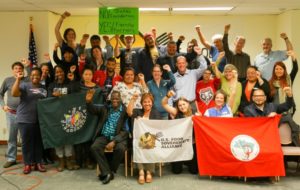 Right now, many of us are asking questions about how to build strong and sustained resistance, how to show up on the side of justice and people-powered democracy, and how to fight the impending fascist policies in our country. Community Alliance for Global Justice recognizes the political strife and terror of this moment – and the power of coming together and resisting together. Through our commitment to anti-oppressive principles in our organizing, we will not let the animosity of the election outcomes derail our collective and historical work toward justice.

You have helped sustain and grow CAGJ into our 15th year so that we can rise up to the moment and build a better world. Thank you. As we move forward, ready to strategize, organize, and mobilize, and linking with other struggles for justice, we hope you will consider giving at this time.

We are proud to share our top achievements of 2016, thanks to your support!

You know that when the grassroots is empowered we will go further in affecting change because you have helped us accomplish our work! With nearly all of our funding coming from individuals throughout our 15 years, this work is not possible without our supporters like you.

p.s. In our 15th year, we are seeking 15 new Sustainers at $15/month! If you are not already a Sustainer Member, please consider becoming one at this time, at $15/month, or whatever amount you can afford! Sustainers agree to have funds automatically deducted from their account, allowing CAGJ peace of mind, and more time to focus on organizing.