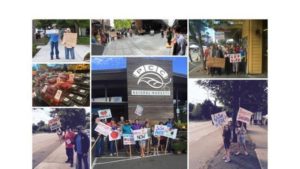 Our goal is 1,000 signatures to bring a strong message to PCC from farmworker supporters. We’re getting there but we need your help! Please sign and circulate widely. Thank you!

In July 2013, they launched a strike when a worker, Frederico Lopez, was fired for asking for a higher wage when production standards were so high that even the fastest workers were making less than minimum wage. The strike led to the formation of an independent farm worker union (Familias Unidas por la Justicia) and formal negotiations with the company management to resolve the many grievances workers brought forth.

However, after all agreements reached in those negotiations were broken by Sakuma Brothers Farm management, and security guards were sent into the labor camps to intimidate the families living there, the workers voted to endorse a public boycott of Sakuma Brothers Farm and their main distributor Driscoll’s, until the company signs a union contract that ensures that agreements reached are legally binding.