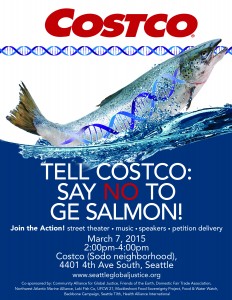 CAGJ’s Food Justice Project has adopted Genetically Engineered (GE)-Free Seafood as our 2015 Local Producers Solidarity Campaign, following on the 2014 SLEE Dinner where we highlighted the role of fisherfolk in the food sovereignty movement. In partnership with Friends of the Earth and others, we are demanding that Costco, headquartered in Issaquah, WA, commit to keeping GE salmon off their shelves.

The FDA is currently in the final stages of approving the AquaAdvantage Salmon, which combines DNA from multiple fish species. The resulting concoction poses significant health and environmental risks. It is the first of at least 35 species of engineered fish in development, and its approval is likely to open a floodgate of modified meat into the marketplace.

Over 9,000 grocery stores have codified their commitment not to sell GE fish by signing Friends of the Earth’s Pledge for GE Free Seafood. As the nation’s second largest retailer, Costco is one of the most notable holdouts.