This post is part of a series of posts covering topics related to CAGJ’s new book, “Our Food, Our Right.” The author, Meagan Nelson, is the Publicity Coordinator at Community Alliance for Global Justice and has a background promoting liberal causes, working in communications and outreach on campaigns for Seattle City Councilmember Jean Godden, Washington State Governor Jay Inslee, and President Barack Obama. Nelson is studying  Communication, Law, Economics and Government at American University and aspires to make the sustainable food movement and its related health and environmental benefits an active political issue in American lives.

For millions of Americans, Walmart is one of their number-one go-to stores in order to purchase the goods that they need, because of it’s great selection and affordable prices. However, customers may be shocked and saddened to hear about the way their beloved store employees are being treated by their company, from reportedly not being paid fairly, to having a lack of hygiene supplies in employee break rooms, improper heating and air conditioning (fixed only when people higher up the chain make a visit) , and, in some cases, workers are homeless. Wanting to fight for justice, Walmart workers have brought attention to Walmart headquarters, wanting  dignity, respect, and fair treatment, only to face suspension, firing, loss of hours, and other scare tactics.  Appalled by this mistreatment of Walmart employees, UFCW 21 started a campaign called Making Change at Walmart, works in solidarity with Walmart to support them through action and protest strategies, currently working against plans to put a Walmart in the Seattle Area. Though Walmart employees are scared for their future, what keeps them going each day is community support from you. CAGJ is a proud partner of Making Change at Walmart, and we will keep you posted on upcoming events. Help spread their message by tweeting the message:

BREAKING: @Walmart is firing #WalmartStrikers for speaking out. RT if you stand with the workers. #nn13 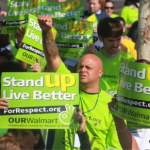