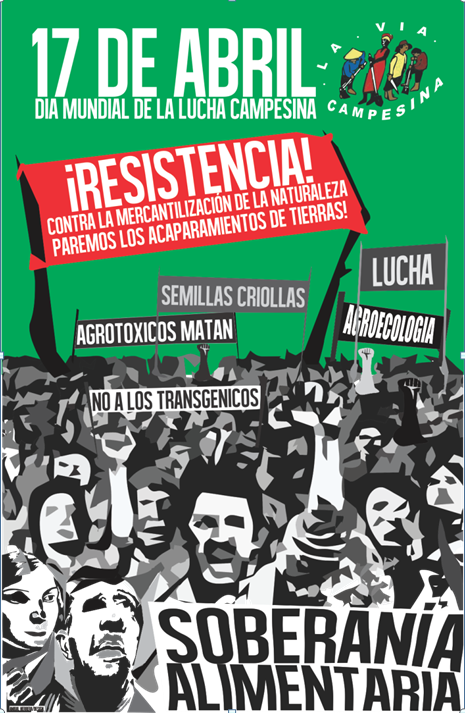 On April 17 1996, in Eldorado dos Carajás, Brazil, state military police massacred peasants involved in the Movement of Landless Rural Workers (MST), killing 19 individuals. At an ensuing protest, military police from two brigades fired tear-gas and live ammunition at 1500 women and men, killing three and wounding 69. Since then, global people’s movement La Via Campesina has recognized April 17 as the International Day of Peasants’ Struggles. Community Alliance for Global Justice stands in solidarity today with La Via Campesina and allies in the US, including the US Food Sovereignty Alliance, and around the world.

Last May, two military leaders involved in the massacre were jailed, but the conditions and systemic problems that made the massacre possible are still producing more victims. As stated by a recent call for action from La Via Campesina, “The dramatic environmental, economic and social crises that we are currently observing have surprisingly not led to a complete change in the direction taken by most national and international elites. On the contrary, we are seeing an increased offensive by economic superpowers to grab all the resources still available to make a profit. Land has become a valuable commodity entering speculative trade, followed by water, seeds etc.”

La Via Campesina has been defending and expanding the practice and policies of food sovereignty around the world for 20 years. To launch another 20 years of struggle, they are calling for a massive mobilisation day this April 17 to reclaim our food system which is being increasingly occupied by transnational capital. Disproportionate power and influence of big agribusiness in particular has led to the now widespread use of GMOs in the US, the defeat of GMO labeling initiative Proposition 37 in California, and the recent signing of the “Monsanto Protection Act”, a rider added to a budget bill that would give immunity to Monsanto and other biotech companies even if indisputable health and environmental hazards linked to their GMO products emerge. At the same time, all over the world, urban and rural communities hit by the same wave of privatisation and destruction of life are resisting against transnational companies and governments who value profit and power over human needs and rights.

“On April 17, Farmers organizations will occupy the Ministry for Agriculture in Dominican Republic, to oppose the mining industry and will march and occupy land in Bahia, Brazil, as well as organize a public demonstration in Portugal. In Mozambique, the National Union of Farmers, UNAC, is organizing a conference on land and seeds in Mozambique. In Europe, the European Coordination of Via Campesina (ECVC) is joining this celebration and organizing a European conference, open to the public, on 17th April, in the framework of its General Assembly. The event is co-organized by its Spanish member COAG (from the Canary Islands) and will be held in Fuerteventura.”

One of the larger actions taking place in the U.S. will be a convergence at the Chicago Mercantile Exchange led by Family Farm Defenders. On Fri. April 19, family farmers and their allies will take action and demand further action on two major issues: harmful trade deals such as the Trans Pacific Partnership and price-fixing at the CME by food giants in defiance of antitrust laws. The protest will be followed by a potluck and open community forum on food sovereignty.

The US Food Sovereignty Alliance, of which CAGJ is a member, is also mobilizing people  to take action with the many amazing members of the USFSA. Read the full USFSA press release, and action alerts below.

Actions, events, and campaigns YOU can support for April 17, International Day of Peasants’ Struggle with USFSA members:

On April 19, CAGJ and partners will read from our new book “Our Food, Our Right: Recipes for Food Justice” along with GRuB and the Olympia Food Co-op in Olympia, WA. Selected readings will include “Farmers at the Table, Connecting Food and Trade Justice” by author Kristen Beifus, “Breaking Bread” a Poem by Merna Hecht, and “Traditional Foods of Puget Sound Project” by author Elise Krohn. CAGJ’s Food Justice Project appropriately has its monthly meeting on April 17 to focus on issues related to food sovereignty and our ongoing work in solidarity with small-scale farmers and eaters everywhere. Everyone’s invited to join us to help organize empowering and fun projects like Educate for Action, a spring Food Justice Hike-a-thon on June 15, and our Solidarity Campaigns in the following five areas:

Community Alliance for Global Justice
www.cagj.org
contact_us@cagj.org
For more on the Food Justice Project, check out our webpage or contact fjp@cagj.org