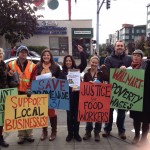 On October 24, a dozen CAGJ volunteers and UFCW organizers celebrated US Food Day by distributing information about Wal-Mart to shoppers at Promenade 23, the retail center on 23rd Ave and South Jackson Street.  As a member of the Puget Sound Making Change at Wal-Mart coalition, CAGJ wanted to raise awareness in the community about Wal-Mart’s atrocious labor practices and the impacts of lowering labor standards on surrounding communities.  We chose Promenade 23 because rumored redevelopment is likely to focus on national retailers, including Wal-Mart, as anchor stores.

Since the property was purchased by Houston-based Weingarten realty, community leaders in the Central area have been raising awareness about redevelopment rumors. Many residents had already heard these rumors.  The majority of shoppers and residents that volunteers encountered seemed pleased to receive information, expressed concern about the loss of the long-time neighborhood Red Apple grocer, and were aware and concerned about low wage jobs entering the community.

We distributed 300 full-page flyers which we hope helps deepen the understanding of Wal-Mart’s impacts, even for those who were already aware of the situation. Unfortunately, media coverage by King 5, the Seattle Post Intelligencer, and the Daily Journal of Commerce was dismissive, stressing that no firm plan exists and that many community members might find a Wal-Mart store convenient.  This highlights the need for community organizing which emphasizes that goods and services can be provided without compromising workers’ rights and community economic security.

3. Daily Journal of Commerce (see below): “Owner ‘evaluating options’ for space in Promenade 23”

By JON SILVER
Journal Staff Reporter
Walmart is said to be looking for new store locations in the Seattle area, and some local activists have speculated that Weingarten Realty’s Promenade 23 shopping center in the Central Area is one of the spots.

A Seattle group called Community Alliance for Global Justice said it organized residents of the area to hand out leaflets at the shopping center yesterday to alert people about the possibility that a Walmart could locate there.

“Promenade 23 is one site that we are particularly concerned about since it already has a union-represented, locally owned Red Apple store,” said Elena Perez, a local coordinator for Making Change at Walmart, another group associated with the leafleting.

Heather Day, executive director of the Community Alliance for Global Justice, said they were not acting on specific knowledge about Walmart’s interest in the site.

Promenade 23, at 23rd Avenue South and South Jackson Street, is anchored by Red Apple and Walgreens, but it has been hurt by the recession. About a third of the shopping center’s retail spaces are available for lease, according Weingarten’s website.

A spokeswoman for Walmart told the DJC last month that it had no new projects to announce in the Puget Sound area.

Carrie Murray, a spokeswoman for Weingarten, issued a statement yesterday that the company was “evaluating all options and (we) have not made any firm plans for Promenade 23.”

She told the DJC that the company is deciding between redevelopment and leaving the shopping center as-is.

“Walmart is not part of either of those plans,” Murray said.