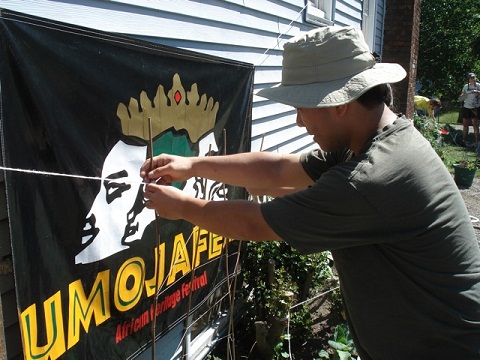 The event begins with an explanation of the UmojaFest Peace Center, by Amber, a key organizer of the center.  The lot (about ¼ acre) had been reclaimed by the African American community in that neighborhood to serve as a safe, creative space for youth to come and hang out, work in the garden, and participate in youth empowerment programs.  From the presentation, the site seemed like a really crucial and influential resource for the community.  There were significant references to “green” economies and jobs, Van Jones, and the “greening” of the lot itself.  That’s what we were for: to volunteer our labor to helping plant and maintain a garden on the lot.  After a quite inspiring presentation by Amber, we broke up into three or four groups to work on different parts of the garden.  There was one group staking tomatoes, another group planting peas, another group weeding, and another group planting Swiss chard.  Amber directed everybody to different parts of the garden and gave us directions for what to do. 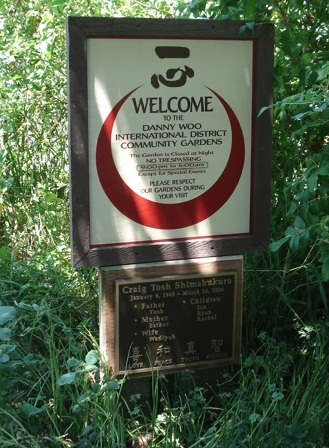 The next site we visited was the Danny Woo Garden in the International District.  This urban oasis was absolutely incredible; an unknown-to-most gem in the heart of the city.  Upon arriving, about 20 people congregated in granite retaining walls, and meandered inside a rock archway to find rolling wooden seats that reminded me of the slides at the state fairs that you swell down on canvas carpets.  They were quite comfortable especially in spotted sunshine. A young man with warm eyes and kind smile, gathered at the mouth of the slide-like seats, and waited as the chatter subsided. He asked for everybody to introduce themselves by saying their name and their favorite vegetable.  When we were done, he introduced himself as Jonathan, the caretaker/coordinator of the garden.  He began his introduction of the farm with a story that happened yesterday, that somehow captured the essence of the Danny Woo Garden.  He was a methodical and expressive story-teller.  The story follows: as Jonathan was about to leave the garden from a hard days work with another group, there was an old man with a long beard who appeared to be homeless raking the gravel where Jonathan was standing.  Jonathan assumed he was just picking up trash and let him be.  After about an hour, Jonathan returned to find the man slowly raking the gravel still.  When Jonathan asked him why he was raking, the old man replied that he was collecting diamonds.  Jonathan looked down to find piles of blue glass that was intentionally integrated with the gravel to subtly give the effect of water flowing off of the wooden seats.  With a garden completely open and accessible to the public, there is no way of controlling the ebb and flow of city life that uses the garden as a resource for whatever needs the garden will serve. 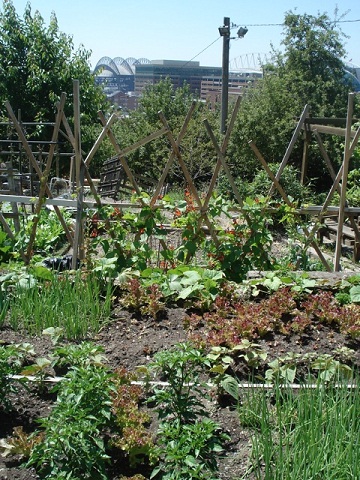 Danny Woo was a rich Chinese immigrant living in the international district fifty years ago.  He owned many properties within the region that is known as China Town or the International District in Seattle.  One of the properties was a vacant lot on a quiet area of the city that had little traffic, and was sloping and not ideal for a development.  The organization, INTERIM, through a lengthy process was granted permission to turn the empty lot into a garden, as long as it was utilized by people living in the area.  When Danny Woo passed away, in his will he gave permission for the garden to be used as a resource for low-income Asian immigrants over the age of fifty.   It has continued to serve that function, with individual beds, or plots provided to low income families to plant and cultivate at their will.  People who are younger than fifty are still allowed to participate in growing in a plot, but must pay $20 a year to do so.  Jonathan explained that the ability to grow a small amount of food eases the transition for many first generation immigrants who are used to living on a farm, and subsistent farming to feed their families.  In addition, it opens up further possibilities for them to grow familiar foods that remind them of home, while getting to know other older Asian immigrants with similar stories and practices from their homeland.  The garden served so many purposes, and its colorful charisma highlighted this eclectic nature.

To provide such a service to the Asian and Asian-American community, much volunteer work was necessary, because funding from grants is limited, and work from paid organizers is sparse.  Jonathan expressed that there is always so much to do, and yet there always seemed to be groups of volunteers such as ours coming to do manual labor and grunt work. 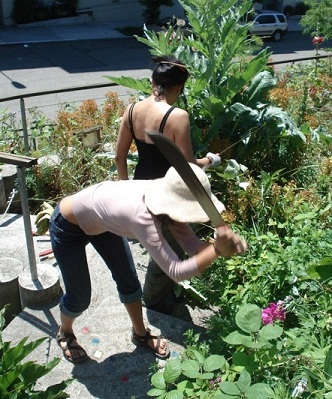 Our group (about 20) divided into about three groups on different tasks.  My group’s task was to dig out invasive species such as bamboo and morning glories with shovels and spades.  The earth was made of blue clay, and probable hard enough to make pottery. We separated out the bamboo and morning glory because of their highly invasive nature, and put the other greens in the compost.  While we worked and sweated, it was a good time to meet other volunteers, and feel our work contributing to the health of this important sanctuary.